Lets All Jump on the Atheist Bus! 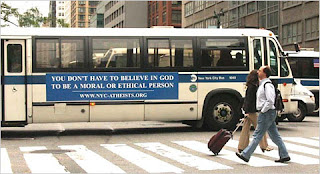 New York City Atheists, Inc. placed a pro-atheist ad on 20 New York city buses which reads "You don't have to believe in God to be a moral or ethical person."

While I am sure it has stirred up its share of complaints, I like this ad campaign better than last year's atheist ad campaign in England, which stated "There's probably no God. Now stop worrying and enjoy your life." While London's atheist ad was amusing, it did stir controversy. The New York counterpart is far less contriversial; it doesn't focus on whether or not there is a god. It simply states that you don't need religion to be ethical. No one can deny that this fits within their rights of free speech, and gives encouragement to NYC atheists without (hopefully) drawing too much criticism.

Even Joseph Zwilling, the director of communications for the Archdiocese of New York, claims that the ads are not offensive to the Catholic Church, because of their careful wording.
Posted by A. Theria at 3:55 AM