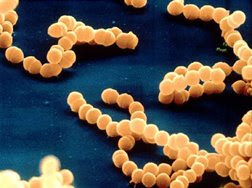 - Queensland Institute of Medical Research scientists are in the final stages of developing a vaccine for Group A Streptococcus (GAS) bacteria. Group A Strep, pictured on the right, is the cause of those annoying strep throat infections, as well as rheumatic fever and rheumatic heart disease. A successful GAS vaccine would greatly increase the public health. Good luck QIMR researchers, may we see your vaccine soon!
Learn more @ http://www.qimr.edu.au/news/2009/articles/strepvacc.html


Physics & Astronomy
- The world of physics is buzzing with the discovery of an outburst of "very high energy" (VHE) gamma radiation from the galaxy Messier 87, also known as M 87. The VHE gamma radiation burst was accompanied by a strong rise of the radio flux measured from the direct vicinity of its super-massive black hole. The gamma rays have energies a trillion times higher than the energy of visible light. An international collaboration of 390 scientists detected and reported the events, using three arrays of 12-meter to 17-meter telescopes to detect the gamma rays and the Very Long Baseline Array, which detects radio waves with high precision.
M 87 is 50 million light-years from Earth and contains a super-massive black hole that is more than six billion times more massive than our Sun.
Learn more @ http://www.scienceblog.com/cms/pinpointing-origin-gamma-rays-supermassive-black-hole-22754.html
http://veritas.sao.arizona.edu/
http://www.scienceblog.com/cms/vlba-locates-superenergetic-bursts-near-giant-black-hole-22755.html

- Sometimes laws fail us, even in physics. Dr Tony Roberts and PhD student Christophe P. Haynes have shown that the fractal-Einstein and Alexander-Orbach laws can fail in some instances. Don't panic though; they derived a new law to replace them.
The laws are used to describe how particles diffuse in complex environments, which affects big scientific questions. Dr Roberts said particles in diffuse in complex environments in much the same way and choose the easiest path. Thus their spread was not uniform, as the old laws predicted.
Enjoy the science @ http://www.physorg.com/news166077673.html

- Leiden theoretical physicists have used string theory to describe a physical phenomenon, something which has never been done before. Despite the theory's popularity, this is the first time that a calculation based on string theory has been published in Science. The calculation may even reveal more information on high temperature super-conductivity.
Boggle your mind @ http://www.scienceblog.com/cms/physical-reality-string-theory-demonstrated-22774.html

Medicine
- Dr. Anatolij Horuzsko, a reproductive immunologist at the MCG Center for Molecular Chaperone/Radiobiology and Cancer Virology, has developed degradable microparticles which deliver the most powerful known form of HLA-G (a natural suppressor of the immune response) straight to dendritic cells. Dendritic cells usually tell the immune system to attack a new organ after a transplant, which leads to severe complications. Dr. Horuzsko's microparticles suppress the dendritic cells, which makes the immune system ignore the organ. This is a significant improvement over current anti-rejection medications and offers a specific tolerance.
Learn more @ http://www.eurekalert.org/pub_releases/2009-07/mcog-mc070609.php

- Losing your mind? Drink some coffee. Various new studies show that caffeine lowers the abnormal levels of a protein linked to Alzheimer's disease. 500 mg of caffeine boosts the memory of Alzheimer to the same level of non-Alzheimer. It did not, however, increase the memory of non-Alzheimer mice.
Check it out @ http://www.j-alz.com/
http://www.physorg.com/news166078859.html

- Proton pump inhibitors (PPI) have proven to be quite successful in treating acid reflux, but new recearch indicates that a few months of prescription level PPIs can lead to a dependency. 44% of people in the study reported at least one acid-related symptom 9 to 12 weeks after stopping the PPI treatment, compared to 15% in a placebo group.
Learn more @ http://www.webmd.com/heartburn-gerd/news/20090702/stopping-ppis-causes-acid-reflux-symptoms?src=RSS_PUBLIC

Biology
- By comparing the genes of slow growing abalone to those of fast growing abalone, the aquaculture industry hope to profit by creating a super-sized abalone. To learn more about the economical biology, go to http://www.physorg.com/news166078595.html

- Dopamine and serotonin are well known neurotransmitters which affect mood. Now MIT researchers, studying the little round worms known as Caenorhabditis elegans, have found that chloride channel receptors open and close quickly in response to the binding of neurotransmitters such as serotonin and dopamine. Researchers hope that these channels may become new targets for neuropsychiatric disorders, such as depression.
Cheer up @ http://www.scienceblog.com/cms/mit-researchers-find-new-actions-neurochemicals-22756.html

Geology
- University of Washington researcher are in the process of putting 200 seismometers in the Olympic Peninsula. They are designed to zero in on tiny tremors which may indicate disastrous earthquakes.